There are watches that tell stories. Sometimes just looking at them, they will start to evoke adistant story… almost whispered. Sometimes u will be lucky enough to find someone who will teli you about it because he lived it. Very often history or the signs of aging are moreimportantin a vintage watch than the time that has been marking tor many years… it is a paraphrase but it is.

We will not bore you with technical data, we will teli you a story. During the presidency of Generai Manue Arturo Odrfa Amoretti, who carne to power in 1948, the Peruvian Air Force was reorganized and, on July 18 1950, its name was changed to Fuerza Aérea del Peru (or FAP). Peru was an ally of the United States and was predominantly equipped with American and British aircrafts.

At the end of Generai Odria’s presidency, the Fuerza Aérea del Peru ushered in the era of jets.
However, on October 3, 1968, a military junta led by the pro-Soviet generai of the Peruvian army Juan Velasco Alvarado staged a swift coup against President Fernando Belaunde Terry, bringing Peru under the influence of the Sovi coup.

The story begins in Peru, in the Peruvian Air Force commands, the Fuerza Aerea del Peru (FAP), whìch, from the end of the 1950s, decided to provide its pilots and commanding officers with reliable and precise wrist chronographs. The first ones were Omega, then later, throughout the 60s and 70s, they were Rolex.
Over the years, the FAP commissioned to Rolex maison just over 700 watches, mostly chronographs, starting from the reference 6238, then 6239 and finally 6263/6265 but also severa! GMT Master 1675 and very few 1680 Submariner (maybe no more than 50 pieces). Each Rolex watch delivered to the Peruvian Air Force had particular characteristicsin the caseback that made it different from standard production and these differences were made directly by Rolex before delivery.
Outside in the caseback we can find the circular writing “FUERZA AEREA DEL PERU”‘ electro-eroded and originally filled with black enamel and, at the bottom, the specific assignment number pantographed very (too…) lightly. lnside the caseback there were the last three numbers of the serial number of the case pantographed (then, later in the 70s, the entire serial number). These details gave the exact identification of the pilot (outer caseback number below). the pilot-watch and caseback-watch pairing (serial number inside the caseback like theone between the lugs ofthe case) soas tomake the assignment absolutely unequivocable. On some watches the pilots wrote their name and rank with rough engravings, on many casebacks (maybe all…) the assignment number has disappeared (too light to withstanduse…); on all casebacks the black enamel that filled the writing has disappeared and many have come to us with the signs of time due to the military use for which they were intended, hard and without much regard. 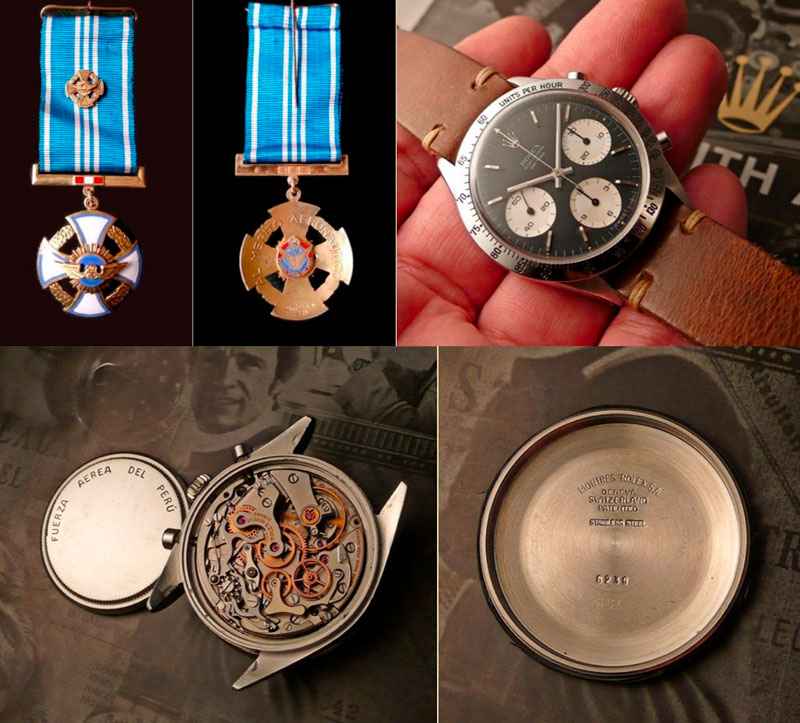